Electric current as the rate of flow of charge; potential difference as the work done per unit charge.

Electric current is defined as the rate of flow of charge, I = Q/t.

Resistance is the defined as V/I, where V = potential difference, and I = current.

Ohmic Conductor… An example of an ohmic conductor is a fixed resistor, it’s resistance is fixed therefore current increases in direct proportion to potential difference. The I-V graph shows this relationship as a straight line through the origin. A component that gives a graph like the one shown below can be described as following Ohm’s Law.

Semi-Conductor Diode… is a component that only allows current to flow in one direction, as in the other direction it has an infinite resistance, so current cannot flow. This is illustrated in the graph below. 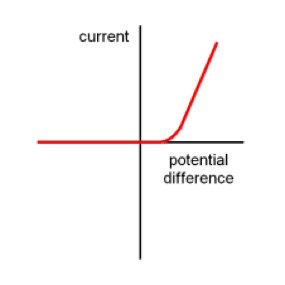 Filament Lamp… This component does not follow Ohm’s Law, and so the current does not increase in direct proportion to potential difference as physical conditions change. This is because, as current increases in the filament lamp, resistance also increases. This increase in resistance is due to the fact that as the wire heats up, the ions within the metal move faster, thus providing more opposition to the flow of electrons. This opposition to the flow of electrons is otherwise described as resistance of the circuit, so as this resistance increases, the rate of change of the potential difference decreases. The graph illustrates the I-V characteristics of the filament lamp. 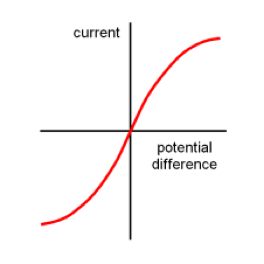 Ohm’s law as a special case where I is proportional to V under constant physical conditions.

Ohm’s Law is, as stated above, a special case whereby current is proportional to the potential difference under physical conditions. A fixed resistor obeys Ohm’s Law.

Unless specifically stated in questions, ammeters and voltmeters should be treated as ideal (having zero and infinite resistance respectively).

Questions can be set where either I or V is on the horizontal axis of the characteristic graph.

In terms of the I-V graphs earlier, the reverse of these should be known as they could put V on the y axis and I on the x axis.

Description of the qualitative effect of temperature on the resistance of metal conductors and thermistors.

However in thermistors as the temperature increases, the resistance decreases.

Only negative temperature coefficient (ntc) thermistors will be considered.

Applications of thermistors to include temperature sensors and resistance–temperature graphs. 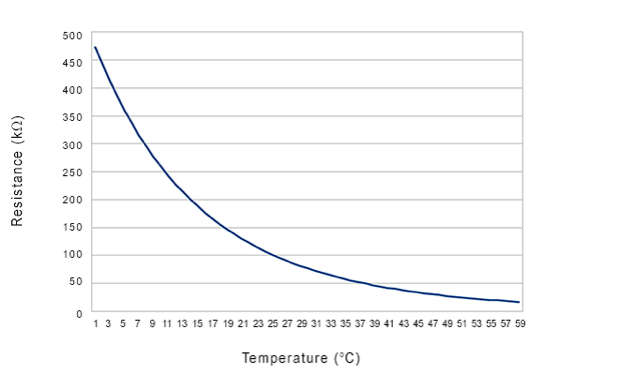 Superconductivity as a property of certain materials which have zero resistivity at and below a critical temperature which depends on the material.

Superconductivity is where, at and below a critical temperature, a given material will have zero resistivity.

Applications of superconductors to include the production of strong magnetic fields and the reduction of energy loss in transmission of electric power.

Superconductors can provide power cables that can transfer electrical energy without energy dissipation, so making cables much more efficient by having less wasted energy. Also, they can be used for making extremely strong electromagnets, for things like particle accelerators or MRI scanners that require a very strong magnetic field.

Critical field will not be assessed.

In series, the resistance of resistors simply adds up, where RT = R1 + R2 + R3… RT is equal to the total resistance of the circuit.

In series circuits… is the same if you where to put an ammeter anywhere in the circuit. This can be seen in the diagram below.

In parallel circuits… splits as it approaches a junction. It splits by different amounts depending on the resistance down the junction, however charge flowing into the junction must be equal to the charge flowing out. The diagram below illustrates this, as depending on the resistances down each branch, the current would change. If the resistance were the same down each branch, then current would split equally. Also it is important to remember that after the current splits into I1, I2 and I3, the current will add up to form I0 (the total charge that flowed into the branches).

In series circuits… is shared amongst the different components. As each electron passes through each component it will drop by a given amount in voltage, which is the potential difference at that point. So from a source V0, if there are three components V1, V2 and V3, then V0 will be equal to the sum of the three components. In the example below, the potential difference of the circuit is 12V, and there are three identical bulbs connected in series. Since they are identical, they will take the same share of the voltage, so 4V each. The voltmeter below each of them is measuring the difference in potential between two points.

In parallel circuits… the potential difference is the same in each branch. This is because electrons carrying the charge cannot split in half, so each branch will get the same voltage across it. This can be seen in the diagram below, where each component has a potential difference of 12V across it. If there were two components in one branch, then the two components would take a share of the 12V depending on their respective resistances. 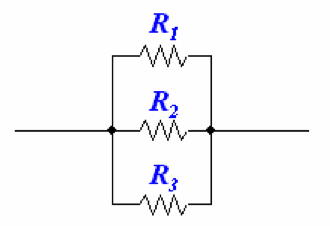 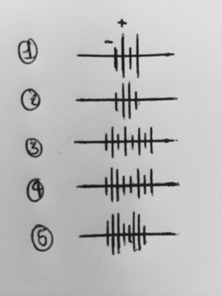 The questions above give examples of how cells interact with each other. Each cell has a potential difference of 1.5V.

Charge and energy are both conserved in direct current (DC) circuits.

The use of the potentiometer as a measuring instrument is not required.

Examples should include the use of variable resistors, thermistors, and light dependent resistors (LDR) in the potential divider.

As you can see above, when attempting to find the output voltage, you can use the equation given above. This is not an equation that is given to you, but is a useful shortcut for finding the output voltage quickly. The derivation of the formula is shown below.

This gives the potential divider circuits a use in sensor circuits, i.e. for temperature or light, which has an output pd that will change as a result of one of these physical variables.

So thermistors work by using known pd values at certain temperatures, so we can read off the voltage value to give us the temperature.

The terminal potential difference is the pd delivered by the source to the circuit, and is always less than the emf due to something called internal resistance. The circuit below illustrates this concept. The internal resistance is as simple as it sounds, it is resistance to the motion of the electrons that actually originates within the cell or power supply. This can be lessened but will always be present even in the smallest amounts, therefore there is a drop in energy due to this resistance, and thus the actual energy supplied by the supply is lessened. This drop can be measured by putting a voltmeter around the supply, and measuring what is called the terminal pd.

You can measure internal resistance by taking readings of the terminal pd for different values of the current, where the current can be adjusted by using a variable resistor. It follows that you can plot a graph of voltage against current, and that the terminal pd will increase as current increases. The graph follows the equation V = – Ir + e,  which mirrors the equation of a straight line y = mx + c. It also follows that –r is equal to the gradient, and a y intercept of e.

Marksphysicshelp aims to provide a complete set of resources for A-Level, GCSE, and University level courses. The name suggests only Physics is covered, but in fact this is indicative of the original purpose of the site. Now though, the site covers Physics. Biology, Mathematics and hopefully more soon.

I really hope this site can help you. I have tried to make resources and provide information in line with that which I would have wanted when I was doing my A-levels. For instance, the physics notes (found via the A-level project above or through the navigation menu) are written in line with the specification, leaving (hopefully) no stone unturned. Please let me know if you have resources you'd like me to post - for any subject!